A recent report by the European Commission notes progress toward a circular economy, but warns several of the 14 European Union (EU) member countries are “at risk” of missing the recycling target of 50 percent by 2020.

The “Environmental Implementation Review 2019” found there has been some improvement in meeting EU requirements on waste management. Recycling rates have increased from 43 to 46 percent from 2014 to 2017 and municipal solid waste (MSW) to landfill decreased by 20 percent between 2013 to 2017. However, several member countries have been identified as at risk of missing the 2020 recycling target.

“Overall, the policy framework for circular economy has been strengthened since 2017,” the report says. “However, several member states should better implement circular economy principles in different areas,” including recycling, the promotion of reuse and repair and the acceptance of secondary raw materials.

Since 2017, the commission has been furthering the implementation of its Circular Economy action plan, which included the publication of the “EU Strategy for Plastics in a Circular Economy” and the adoption of amendments to waste legislation. The commission also adopted a “monitoring framework” that allows policymakers to identify good practices and prioritize areas where further action is needed.

In its report, the commission urged several of the member countries to “incentivize resource efficiency measures, improve their eco-innovation performance, increase awareness and foster the uptake of voluntary instruments,” including the EU Ecolabel and audit schemes, and “increase recycling and circular measures in the small and medium sized business sector. In addition, struggling member countries should introduce or improve policies, such as landfill taxes and pay-as-you-throw schemes, “to further implement the waste hierarchy and make reuse and recycling more economically attractive.” 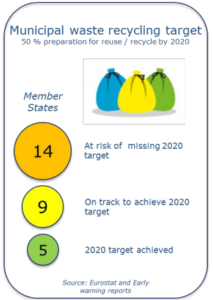 Waste prevention remains an important challenge in all member states. According to the report, only nine member countries reduced their MSW per capita between 2014 and 2016. The report calls for EU countries to “increase the effectiveness of separate waste collection systems” to improve recycling and “implement new measures” to shift reusable and recyclable materials away from incinerators and landfills.

The report also highlights best practices. Slovenia has implemented a “comprehensive strategy on circularity” with the help of EU funds, which “illustrates that circular economy policies and improved waste management can be done in short time frames,” the report says.

France adopted an “ambitious road map for circular economy in 2018,” with targets to reduce resource use by 30 percent by 2030 and recycle 100 percent of plastics by 2025. In addition, Denmark has a “significantly higher” population of SMEs offering green products and services compared with other European countries.