Final Conference of the KATCH_e project “Circular Economy: Moving forward with a knowledge base”

The Final Conference of the KATCH_e project, designated as “Circular Economy: Moving forward with a knowledge base”, took place during the morning of the 19th November in Lisbon, Portugal. It gathered all partners, several national stakeholders and many other participants who discussed the results of the project and other circular economy-related initiatives. The conference also had a prospective character: 3 years after the beginning of KATCH_e, the debate and knowledge around circular economy (CE) has advanced. How did the KATCH_e project contribute to such knowledge and implementation practices, and which are the main gaps for the future?
The conference took place in the premises of IAPMEI, the Portuguese Agency for the Competitiveness and Innovation. 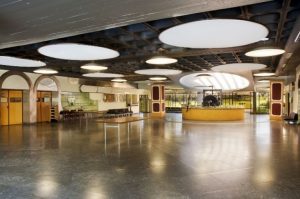 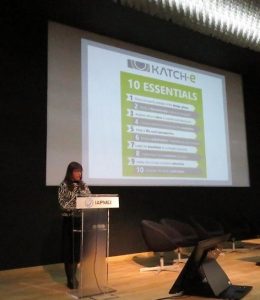 After the welcoming session by the representative of IAPMEI Board of Directors, Nuno Gonçalves, and a brief KATCH_e presentation by the project coordinator (Cristina Rocha, LNEG), four speakers made very interesting presentations which represented different points of view: 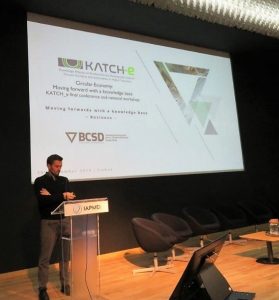 João Meneses, from the Business Council for Sustainable Development, Portugal, gave the business perspective, highlighting the business opportunities and the need to reshape the business value in the context of creating system value (in contrast to the traditional creation of shareholder value).
With several facts and figures, and very catching videos, João concluded that business as usual is unacceptable for people, planet and profit – and argued why. 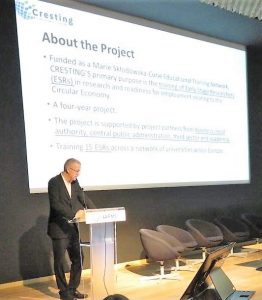 Tomás Ramos, from the Faculty of Sciences and Technology of NOVA University, Portugal, represented a European academic perspective through the Marie-Curie CRESTING project. It is training 15 early stage researchers in the field of circular economy, specifically on the following:
• To what extent have CE-practices already occurred in public and private sector policy and practice?
• What are the environmental, social and economic implications of developing the CE, and how do these vary by scale (locally, nationally, and globally)?
• How can current CE practice be applied in different geographic/industry contexts?
• What methodologies of impact measurement and sustainability indicators can be developed for public and/or private sector organisations in the context of a CE?
• How can the CE in practice be understood beyond the policy and other aspirational definitions of the term?
The CRESTING project will doubtfully lead to a remarkable knowledge advancement in the field of circular economy. 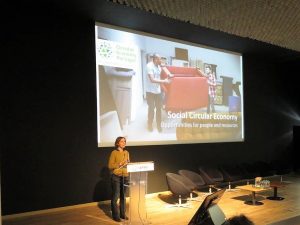 Andreia Barbosa, from the Circular Economy Portugal, represented the view of an NGO. In her presentation, Andreia argued that (i) policy and institutional innovations are necessary to enable CE on a large scale; (ii) social economy and circular economy can be mutually reinforcing and (iii) policy should support synergies between circular economy, inclusion and job creation. She illustrated her speech with several inspiring examples. 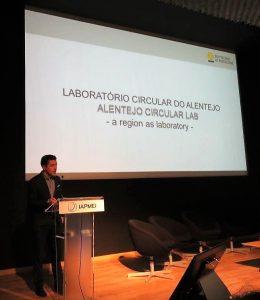 Luís Loures, from the Polytechnic Institute of Portalegre, spoke about a regional experience: Alentejo (in the south of Portugal), a region as a lab for circular economy. Alentejo is indeed equipped with a Circular Lab that focuses on five thematic areas:
• Energy and waste valorization;
• Construction and demolition waste;
• Agrobusiness and sustainable production;
• Eco-design;
• Water.
He concluded with criticism regarding the barriers that public procurement policies still raise to the construction of the BioBIP 2 Technology-based incubator according to sustainability and circularity criteria. In the end, it will be the lowest acquisition costs that prevail.

After a period of debate, there were two panels in which António Vasconcelos, from The Natural Step (TNS) Portugal, challenged the KATCH_e consortium:
• What was the reaction of academia, inside and outside the partnership, to the results of KATCH_e?
• One of the objectives of the training, inherent to the field of circular economy and sustainability, is to have transdisciplinary teaching and learning. Knowing that ‘circular’ and ‘sustainable’ are not exactly synonyms and relate to complex systems, in your opinion was KATCH_e able to promote this?
• What is the applicability of KATCH_e approaches and results in companies? What seems to work best and what are the main limitations?
• Which outputs can companies expect from the implementation of the KATCH-e materials?
The panels were composed by the facilitator, António Vasconcelos, and
• Kirsten Schmidt (Aalborg University), Rainer Pamminger (Vienna Technical University), Maria Kalleitner-Huber (Austrian Institute of Ecology), Elena Mulet (University Jaume I), João Sampaio (University of Aveiro), in the academia group;
• Cristina Rocha (LNEG), Oihana Hernaez, (Prospektiker), Susana Silva (Amorim Cork Composites), Thomas Meinschad (DOKA), Michael Glibstrup (Hoejer Moebler) and Irina Celades (Institute of Ceramic Technology), in the business group. 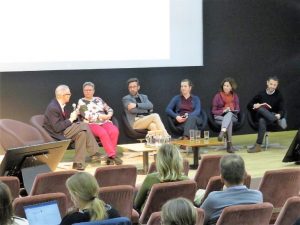 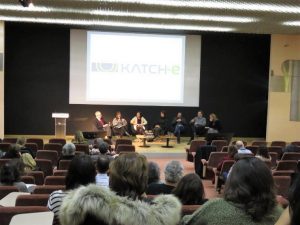 The afternoon was dedicated to the national workshop and at the day was closed by the Head of the Renewable Energies and Energy Systems Integration, Ana Estanqueiro (LNEG).