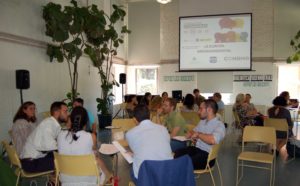 The Institute of Ceramic Technology (ITC) is at CONAMA 2018, the National Congress on the Environment held from 26 to 29 November at the Palacio de Congresos, with the aim of disseminating the progress of research projects in the field of sustainability and respect for the environment, the circular economy, climate change and industrial symbiosis among others.
But, in addition, this year as a novelty, the ITC has participated with two oral presentations in the space CONAMA CONECTA, dedicated to the dissemination of European projects, having the opportunity to know various activities, in addition to being able to present their own.
One of them focuses on industrial symbiosis, one of the major areas in which the ITC is involved and which was disseminated through an oral presentation in the CONAMA CONECTA space on 27 November, specifically through the SHAREBOX project, financed by the Spire programme within the European Union’s Horizon 2020 framework, which aims to facilitate the implementation of industrial symbiosis in different industrial areas, including the La Mina de Nules industrial estate in Castellón. To this end, an on-line tool is being developed to identify and optimise industrial symbiosis actions, i.e.waste, it favours the lasting exchange of resources such as water, waste, energy and services between companies from different sectors, with the final objective of reducing production and waste treatment costs. Industrial symbiosis also leads to a reduction in the need for virgin raw materials and a reduction in the amount of waste deposited in landfills. It is therefore key to implementing industrial processes that are more environmentally friendly and in line with the principles of circular economy. It is coordinated by IRIS and there are a total of 16 participating entities. In addition to the Institute of Ceramic Technology (ITC), these include companies, universities and research centres. Four of the participating companies (Keros Cerámica, S.L.; Kerafrit, S.A.; Guzmán Global, S.L. and Ibérica de Suspensiones, S.L.) are located in the Polígono La Mina de Nules (Castellón) and come from the chemical, ceramic and automobile sectors. (http://sharebox-project.eu/ )

Another presentation, on 28 November, focused on the LIFE CERSUDS project, Ceramic Sustainable Urban Drainage System, (www.lifecersuds.eu ) which is financed by the European Commission through the LIFE programme, which has developed and installed in C/ Torre San Vicente de Benicàssim (Castellón) an urban sustainable drainage system (SUDS) that uses ceramic material of low commercial value as a paving filtering system. In addition, it collects water from excess rainfall, stores it, and subsequently reuses it for watering landscaped areas.

In addition, this year a contribution was made to the poster session with a paper on the European project E-USE (aq) which, in collaboration with the Nules Town Council and the company ITECON, has achieved, with the use of geothermal energy in the heating of the municipal swimming pool of Nules, an energy saving of around 20,000 € per year. It has also managed to avoid the emission of 38,500 kilograms of CO2 into the atmosphere, and all thanks to the momentum of the European Institute of Innovation and Technology (EIT) that supports the European network Climate-KIC, which is integrated ITC, whose main objective is focused on fighting to mitigate the negative effects of climate change. It is in this network that the European project E-USE (Europe Wide Use of Sustainable Energy from Aquifers) is framed, which focuses on promoting the use of sustainable energy from aquifers throughout Europe, such as geothermal energy in this case. http://bit.ly/2t999ZG

On the other hand, in the field of Circular Economy, the dissemination of the KATCH-e project was highlighted: Alliance for knowledge in the development of products-services towards a circular and sustainable economy in higher education. This project develops training in Circular Economy in the Construction and Furniture Sectors, and is co-financed by the Erasmus Programme of the European Union. www.katche.eu

About CONAMA 2018
From 26 to 29 November 2018, the 14th edition of the National Congress on the Environment, Conama 2018, was organised. This biennial event has become the benchmark environmental event in Spain since its first edition in 1992, due to the quality and breadth of the contents dealt with, the high level of participation and the variety of professional profiles and environmental sectors represented.
With more than 7,000 participants in its last edition and a network of more than 450 collaborating institutions, including companies, administrations, universities, technology centres and third sector entities, Conama, as it is popularly known, is an essential event for environmental networking, the sharing of knowledge and experiences and the creation of collaborative networks between different actors working for sustainable development in Spain and Latin America.
The congress is organised by the Conama Foundation, an independent, non-profit Spanish organisation which, in line with ODS-17, acts as a sustainability hub in Spain, with the mission of contributing to the creation of solid alliances between governments, the private sector and civil society in order to achieve sustainable development.
The 2018 edition has as its slogan Rumbo 20.30, and with this slogan it aims to send a message to all of society to accelerate the ecological transition and towards sustainability. The organisation wants Conama 2018 to serve as a driving force to meet the challenges that commit Spain within the framework of the UN Agenda 2030 and the EU’s objectives for 2020, 2030 and 2050. For this reason, in Conama 2018 a compilation of objectives and targets based on the main European strategies is carried out in a time horizon (2020, 2030, 2050).
www.conama.org