A new study released by the Reloop Platform and Zero Waste Europe, and produced by Rezero, demonstrates that existing economic instruments can bring Europe to the next stage of the Circular Economy. The study examines existing measures and incentive schemes, which have been used successfully for products such as beverage containers, and identifies additional key waste streams that could benefit from such measures.

It is predicted that the implementation of measures such as deposit refund schemes, refundable taxes and buy back schemes would lead to a major reduction of littering and a significant reduction in plastic pollution. Such instruments are already widely used in the private sector, but have yet to be fully utilised from a public policy perspective. 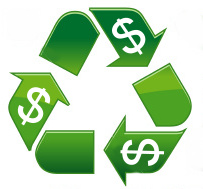 This study highlights the fact that, despite widespread support for the circular economy across all stakeholders, current fiscal policies continue to support a linear economy model. This is evident in the unacceptably low collection rates for textiles (<20%), cigarette butts (<35%), batteries (<40%), and even lower rates for other waste streams such as coffee capsules. Without strong economic incentives for collection, it is unlikely that these numbers will change.
To read more and download the study: http://reloopplatform.eu/new-study-presents-plan-for-circular-economy-using-existing-economic-measures/