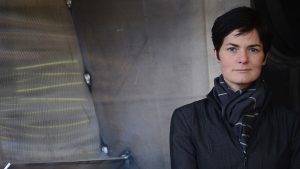 The British former round-the-world sailor and founder of circular-economy charity Ellen MacArthur Foundation said she wanted architects and designers to join her fight to eradicate industrial waste and pollution.

“The design fraternity is absolutely a target for us, because designers build the world,” MacArthur told Dezeen. “So they’re an absolutely vital fraternity in designing something that fits within the [circular] system.”

MacArthur, who gave up her record-breaking solo sailing career to launch her foundation, said it was vital to get designers and architects on board to ensure that products and buildings are designed to help regenerate the planet, rather than exploit it.

Initiatives by the Ellen MacArthur Foundation include a guide to circular design
She added: “If you think about young people going through education today, if they want to be the designers of the future, what an amazing opportunity to be part of building a restorative, regenerative future; a future where we can recover materials and feed them back into the economy.”

MacArthur, 42, spoke exclusively to Dezeen ahead of her foundation’s annual summit, which takes place in London on 13 June. The summit features a discussion about the role designers can play in encouraging the switch to a circular economy.

MacArthur explained how, after breaking the record for fastest solo circumnavigation of the world in 2005, she quit sailing in order to dedicate herself to proving the economic benefits of circularity.

“Whereas within a circular model, from the outset you design in a way whereby that product comes back into the system: the components are recovered, the materials are recovered.”

“Linear is worth less than circular”

Her foundation has set out to prove the financial benefits of a waste-free economy, producing a series of influential reports on different sectors including plastics, fashion and fast-moving consumer goods.

“Every single time we’ve produced a report, it’s been overwhelmingly positive,” she said. “Linear is worth less than circular.”

Her landmark 2012 report Towards the Circular Economy was the first to set out the business and economic benefits of a sustainable economy, while the influential New Plastics Economy report of 2016 set out to rethink the way plastics are used.

It found that 95 per cent of plastic packaging, worth $80-120 billion, is wasted each year. Its claim that by 2050 there could be more plastic than fish in the sea generated headlines around the world.

During the interview, MacArthur discussed the work of her foundation as well as her views on how to tackle ocean plastic and the wastefulness of the fashion industry.