The circular economy can cut by half greenhouse gas emissions 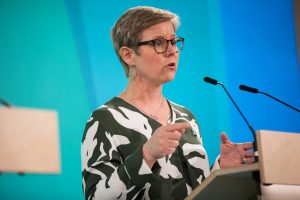 This was stated by the Finnish Minister for the Environment during the meeting of EU ministers for the sector, which discussed the need to speed up the implementation of the circular economy and expand it to more sectors.

On 11 and 12 July, the informal meeting of European environment and climate ministers was held in Helsinki (Finland) on 11 and 12 July. The event was also attended by Karmenu Vella , EU Commissioner for the Environment, Maritime Affairs and Fisheries. Jyrki Katainen , Vice-President of the European Commission for Employment, Growth, Investment and Competitiveness, and Per Klevnäs, partner of Material Economics, gave opening speeches on the circular economy.

The Finnish Minister for the Environment and Climate Change, Krista Mikkonen, stated that “climate change and the loss of biodiversity are the greatest challenges of our time. By moving from a single-use culture to a circular economy, the EU could halve greenhouse gas emissions by 2050. Improved recycling of materials would also reduce the pressure on nature caused by consumption. The EU’s competitiveness must be based on sustainability, climate change mitigation and savings, long-term use of renewable natural resources.

According to ministers at the informal meeting, the goal must be to achieve a society that does not waste natural resources, but creates new business opportunities from scarcity and problem solving. Manufacturing and consumption must be based on the six Rs of sustainability: reject, reduce, reuse, repair, remanufacture and recycle.

SUSTAINABLE SOLUTIONS, AN OBJECTIVE FOR THE FINNISH PRESIDENCY
Finland will hold the Presidency of the Council of the European Union from 1 July to 31 December 2019 and will chair formal meetings of the Council in Brussels and Luxembourg and informal ministerial meetings in the Nordic country.

Sustainable development forms a common thread throughout the preparations for the Presidency meeting. The meetings have been centralised in the capital, Helsinki, in order to minimise transport emissions. Finland will produce very little physical material for the Presidency and will pursue a no-gift policy. The money earmarked for Presidency gifts will be used in full to offset carbon dioxide emissions from delegates’ air travel.

“Finland holds the Presidency of the EU Council at a crucial time. The time to resolve the sustainability crisis is now. Working together, the EU can find solutions both to the climate crisis and to stop the sixth mass extinction. Our window of time is closing. We must raise the profile of the EU as a global leader in climate action to the next level,” said Mikkonen.
https://www.residuosprofesional.com/economia-circular-reducir-emisiones/